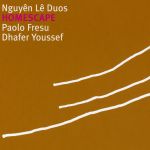 Stranieri means foreigners in Italian.
Byzance is one of the ancient names for the city of Istanbul, Turkey. In french it also means wealth & abundance.
Muqqam (Persian) musical mode; (Arabic) scene.
A (reversed) sample of Papua vocals was used in Mali Iwa, name of a ritual dance in New Guinea.
Zafaran is the Arabic name for Saffron, a yellow and precious spice discovered in India which spread out in Spain (paella), Italy (risotto), North Africa (couscous) & France (bouillabaisse).
Domus de Janas - House of the Fairies – are prehistoric granite constructions in Sardinia. This tune features a (vocoded) sample of a choir from Sardinia, « Confraternita ‘Su Cuncordu ‘e su Rosariu’ di Santu Lussurgiu ».
Kithâra : string instrument sister of the lyre in ancient Greece, sharing some common roots with the oud and the guitar. This piece celebrates the meeting of the ancestor of the guitar (the oud) with one of its heirs, the vietnamese guitar, which bears scalloped frets, and is usually played in southern Cai Luong style.
Chelsea Bridge is a jazz standard by Billy Strayhorn, a mainstay of the Duke Ellington Orchestra.
Safina (Arabic) : the Vessel. Title of a manuscript by Bin Ali Bin Isa (19th century, Algiers), compilation of arabic poems.
Des Prés - From the Fields.
Thang Long - Ascending Dragon - is one of the ancient names for the city of Hanoi, Vietnam.
Neon – modern light.
The Mangustao title comes from the delicious Mangosteen tropical fruit, as well as from the chinese philosophy of the Tao. This piece (a melody by Dominique Borker) was previously recorded on Nguyên Lê’s « Tales from Viêt-Nam » CD and is also the title of a CD by vietnamese singer Huong Thanh.
Lacrima Christi is the name of an Italian wine from the Campania region, on the sides of the Vesuvio volcano.
Beyti (Arabic) My Home.